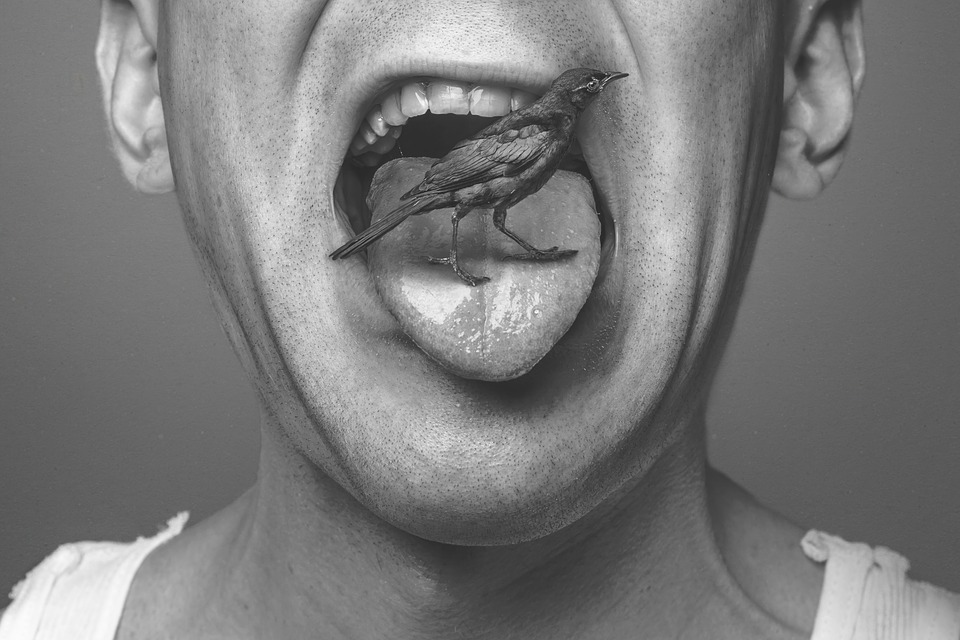 IT'S ALL GIBBERISH TO ME 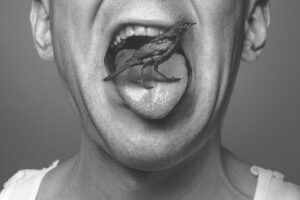 “A different language is a different vision of life.”
– Federico Fellini

GIBBERISH – also known as Gromolo in parts of Europe, is hated by some, feared by others. It’s loved by those who do it well and it’s done poorly by many.

GIBBERISH is a made-up language.

When babies speak before they understand what language is, they speak GIBBERISH. When clowns talk in a foreign tongue, it’s almost always GIBBERISH. And for improvisers, GIBBERISH is a tool and technique that solves some of our worst problems.

Before we learn some easy techniques to improve your skills, let’s try to convince those who doubt the worth of Gibberish why we should even be thinking about this foul beast.

Improvisers fall back on intellect and speech for safety. When they’re nervous or living in self-protection mode, most improvisers default to TALKING HEAD status, where the body becomes a rigid statue holding the non stop blatherings of the head up for everyone to hear.  Gibberish frightens those people because it takes away the safety mechanism of language.

But what does Gibberish give back?

Relying on the language we speak every day, tends to minimize our emotional expression.  We know that the words will transmit the message so we don’t add more than the minimum of expressions.  With gibberish, the full range of communication is brought forward.

With gibberish, we show more emotion.  We physicalize more to amplify the ideas we want to express. This makes us more dynamic. On the listening side of communication, we are forced to attend to our partners better. If we only relied on listening to the “words” we’d have no understanding what the gibberish meant so we’ are forced to pay attention (like we should normally be doing) to our partner’s face and body.

If those arguments aren’t enough, think about what happens to your narrative skills. On a night when the stories are unfocused or confusing, gibberish has a way of simplifying storytelling. You might argue that you want a  more complicated story, and that’s fine. But, if you can learn to tell a simple, physical/emotional story without reliance on excessive dialogue then you’ll be able to weave greater ideas together in a way that doesn’t leave the audience shaking their head from confusion.

And finally, from a character perspective. Well-formed gibberish is a great tool to build a character and anchor it into your body.

Anyone who performs in another language other than their own feels a  shift in their personalities when they move between German and French or Japanese and Spanish. HOW we speak alters how we move and feel. For those of you too lazy to learn another language, polish your Gibberish skills as a way to build a solid character.

“Bad gibberish” doesn’t have as many of the positive impacts we’ve just been talking about and it tends to irritate the listener.  In the world of improvisation where some groups accept every offer as good work, what is “bad” gibberish?

Try not to be disheartened. Here are some techniques for instant Gibberish improvement.

Finding the words.  A problem for some people is the difficulty even coming up with  words for their gibberish. Keith Johnstone would have people loosely script their gibberish.  He’d have them write little cue cards of random gibberish words and phrases which they read at any time in the scene.

Another approach is USE WHAT YOU KNOW (but mess it up).

Point to something and say, “That’s a – …” And end the sentence with the word flipped around.  A DOOR becomes a ROOD.  A CAT is a TAC. It’s easy…

Let me clarify “easy“.  It’s as easy as you make it.  “CAT” and “DOOR” are simple words to flip around.  What about “TELEVISION” and “INTERCONTINENTAL BALLISTIC MISSLE?”

If you are trying to get it PERFECT. Then it’s just going to mess you up. Your goal shouldn’t be to get the word perfect. Just flip a few syllables around and let your tongue dance around the mess you create.

I just tried “TELEVISION” and it became Nellivityo. That’s nowhere close to “NOISIVELET” (‘Television‘ backwards) but it’s good gibberish and that’s the point. The aim of flipping words is not to flip words. The aim of the exercise is to give you a tool to inspire your brain to solve the problem of finding “words” in gibberish.

Go grab a friend who speaks another language. Have a conversation. It’s all gibberish to you when they talk, right? So, steal one or two words when you respond to them.  You don’t have to know what the words mean.  You just have to start slow.  Let them lead. Respond with short sentences or a word or two. Remember, THEY are the expert. Don’t talk more than they do. (Nervous people talk too much – EVEN IN GIBBERISH).

Let’s say you don’t have a friend who speaks another language. First of all, diversify your base of friends. Second, pop on a foreign language movie or YouTube clip of Roberto Begnini or another speaker you don’t understand. Listen to their wonderful “Gibberish” and then try to jump into the conversation with them. Use their words and then make up one or two words that suit the language. Mix your creations in with what you are hearing.  If it gets muddy or stressful, listen more than you talk and learn to say one or two more words.

YOU DON’T HAVE TO GET IT RIGHT.  Destroy their language. BONJOUR in french becomes BUNJA in gibberish.  The trick here is to start slow. LISTEN. Let your partner lead. MIMIC what you hear and play with what you are learning. Aim for getting close to what you hear and accept the approximate mess.

Repeat words your partner says.  If they say:
“A grooti Sar im parpar“, then reply using one of the words you heard.
“Aieeee! A lipti sar PARPAR!!! Manchetti lima PARPAR eh scooti PARPARTEETEE!!!!”

This is how we speak in our own language. Listen to how many words you and your friends borrow from each other all the time.
“How are you doing?”
“I’m doing fine.”

Steal what you hear and you will have created a shared language.

Emotion should find its way into gibberish.  This emotional expression is one of the strengths that gibberish encourages in performers.  If you find that you aren’t allowing emotion to come out, then randomly find a moment to growl your words or laugh as you speak.

Because we don’t know what these words mean, you aren’t going to be wrong reacting strongly to what your partner says.

A little more emotion information: Strong emotions have the ability to interfere with intellect. What this means is, you are more likely to access strong spontaneous reactions when you are in an emotional state. That’s useful for people who are in their head on stage.

OMG, this blog is PURE GOLD. One day I’m going to read ALL of your articles from A to Z.

For now, thank you very much for that post about gibberish, it’s giving me a fresh perspective on the topic and also for the article about working with puppets (brilliant!) and for reintroducing me to the He Said / She Said Game, which is one of my favourite games, when teaching endowement and accepting.

I’m really, really curious about your thoughts on two really interesting topics: 1. Mask Work (as in the last chapter of Improv) and 2. Slow Comedy as a form of improv.

Any chances that you would write something on those two fascinating aspects of improvisation?

Hey Rafal,
Thanks for your kind comments. Part of me really hates writing about improvisation because writing is so static. You write it, it’s there and it loses flexibility. Not like Impro at all! In a class and with shows, it adapts and changes as it should. But, I’ll keep writing and see if I can get it to work 🙂

And because I like to write for someone’s specific interest, I will try to include something about Masks and Slow Comedy in an upcoming newsletter for you. Thanks for asking.

My early work was in Mask performing. Love it.
If you haven’t signed up for the newsletter, here’s a link so you won’t miss the article when I get around to writing it.

Thanks again for writing. Drop suggestions, questions and thoughts by any time.
Shawn