He said / She said 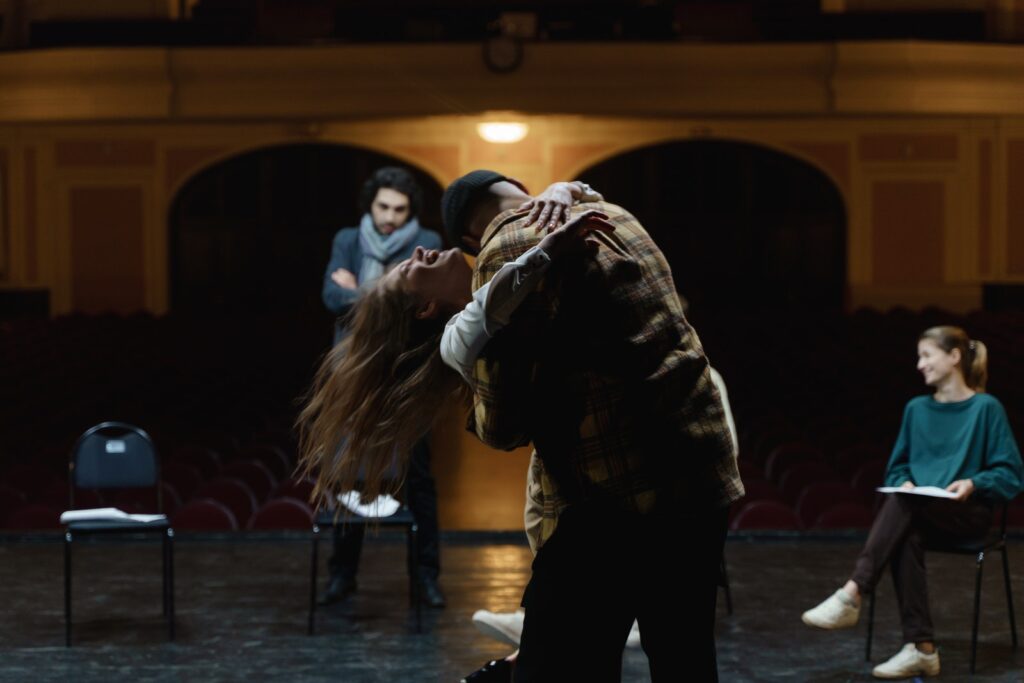 The misconception that improvisation should always be effortless leads many people to avoid useful exercises that might take some effort to learn.

“He said / She said” or “Stage Directions”  is one of those exceptional games that benefit improvisers who play the game as it was intended.

Suggested by actors in Denmark, Keith Johnston formalized the game in his book IMPRO FOR STORYTELLERS.  He recounts that the original game in Danish was titled “He Said- Removing His Trousers“ and adds that the original Danish, (Sagde han, og trak sine bukser op!)  has a nicer ring than the English translation.

Keith adds “I have only once met an adult who wasn’t confused by this game.”

I hated this game when I was learning it. It took more than a decade to reconsider its value.  Now, I love playing it and believe it’s one of the best teaching exercises for creating rich narratives with detail and physicality.

I hope I can offer you some approaches to make your first interaction with Stage Directions more approachable. There’s always more than one way to approach your target.

ORIGIN: “Suggested by actors at Tournus (Denmark) when we were exploring ways to control each other.”   Keith Johnstone, pg 195 – Impro for Storytellers.

GOAL:  Giving up control to your partner and stopping people from planning too far in advance.

THE SIMPLE VERSION: Performers control their partner’s actions to forward the story with immediate stage directions.

PROCEDURE:  Get two people on stage. Albert and Marie are in a living room. Walk them through the mechanics of the game.

2. Ask Marie to give Albert his stage action, starting with the words “HE SAID…“

“He said, approaching me with flowers.“

3. Ask Albert to do what Marie directed.
THE ACTION:  Albert crosses the room holding flowers.

Now, Ask Marie to say something

“She said wrapping her arms around him, squishing the flowers.“

Marie probably has caught on by now and performs  THE ACTION. Continue the scene with the stage directions. Let them know it’s not easy and not worth trying too hard to get it right the first time.

Keith calls this the SHADOW VERSION. Break into groups of four. Pair one person on stage with one person off stage.  Two people on stage will do the dialogue and pause after they speak so that the off-stage people can give stage directions.

This technique can be useful when performers feel overwhelmed switching between being the actor and director.

Move back to the onstage actors doing the stage directions fairly quickly.  Let there be a little struggle. It’s good for the brain.

Do a two-person scene where you give stage directions to each other’s dialogue but you don’t actually act it out physically.

Having your eyes closed tends to relax the brain and helps some people cope with the transition between the role of actor and director more easily.

You don’t have to have a correct answer. You just have to speak those scripted words loudly, confidently, and immediately, then see what happens next.

DIALOGUE: Hi Albert!  ((Marie has turned to him with a surprised look.))

STAGE DIRECTION:  She said turning to me with a surprised look

When performers habitually do this, ask them to try again. If they are completely stumped. Have them perform blindfolded. (They can’t suggest what they can’t see). If you try this, have others on the edge of the stage to keep them safe.

This can be useful and it reflects well on Keith Johnstone’s intention that this game is about taking away control from performers.

STAGE DIRECTION:  She said, AS I TOOK IT  and looked at the microbes.

In this example, the performer stays safe and keeps the focus on herself by creating actions she can do to control the scene. Her partner can only stare and watch her take over.

The intention is to remove control and take risks. You’ll probably go through a few hundred suggestions like:

“She said, looking around,”
“He said sitting down.”
“She said, stepping back”

You might be getting bored at this point.  You have only yourself to blame for that boredom. Right?

If you are bored, make suggestions that put you and your partner at risk:

“She said, opening my diary and reading from the page I had been hiding from her”
“He said, locking the door and dropping the smile from his face.”
“She said, finishing her tea and unzipping her skin.”

VARIATION: – Over the years some useful variations have come up. Some are good.  Some… not so much.

At the Loose Moose theatre, we would play a couple of Gibberish variations.

GIBBERISH VARIATION  1
In the first Gibberish variation from Keith, the dialogue is in Gibberish (made-up language) with the stage directions in your working language:

STAGE DIRECTION (English):  She asked as she watered the Lillies.

THE ACTION: Water those damned Lillies!!!

GIBBERISH VARIATION 2
The second obvious Gibberish variation occurred when I was looking for a way to get people to take more initiative with being physical. I’m sure many others have tried this.

Reverse the Gibberish role.  The Stage Direction is in Gibberish.

DIALOGUE (English): Thanks for coming Richard!

THE ACTION: (anything) Unscrewing the baseplate of the unexploded bomb, patting the old dog, flicking your hair seductively, etc. HINT: Consciously push yourself to do something bigger than you normally would.)

A third variation I’ve explored includes stage DESCRIPTIONS – not Stage DIRECTIONS.  This version alters the use of the game.

While it technically removes some control from your partner, its main use is primarily to add platform details and colour to character and environment.

The stage direction, “He said, opening the jar,” is replaced with a description the environment or person. “He said, as his Gold palace glistened in the morning sun.”

Your partner isn’t told to DO anything in particular but they might be inspired to interact with you and the environment because you have given some hint of what is implied and what is possible.

Stage Directions are also capable of Descriptions, but in this descriptive variation, we concentrate on developing incidental and important details.

If the stage description is “the sun scattered around the room through the stained glass image of St. Francis,” my partner isn’t called upon to comment on the light or the stained glass window.  He simply has hints of what might be inspiring to do in this environment. He is inspired by the environmental description to become a priest who walks to the pulpit.

With so many improvisers trained to blatantly call out every mundane detail of their behaviour – “I am pouring coffee,”  “I am going to the door,”  this exercise calls on the improviser to see and hear and be inspired without having to comment or use every incidental existing detail.

It’s not the same exercise as Stage Directions but it has its purpose.

BASTARDIZATIONS:
Luckily the following variation has almost died out. It is difficult to watch and it produces little benefit from the original game. It’s the epitome of a “HOOP” game that focuses primarily on the performers doing something technically difficult without benefit to the scene.

If you work with a game or exercise, ask yourself if you are doing it to better your work or are you doing it to show off your ego. “Hoop games” are all about the clever ego.

Some people write about the “halting nature” of “HE SAID/SHE SAID” which they argue gets in the way of improvisers flowing through the scene. Some people argue that it’s artificial or just “too damned difficult”.

I will concede that for some improvisers, the mechanics of “He Said/She Said” can be challenging, but you could say that about most new things  – riding a bike, learning to read, etc. Stage directions is easier than either of those.

Played well, the exercise can flow smoothly, forces  improvisers who talk too much to pause and it allows for physicality which is absent in most people’s work.

If at first, you feel frustrated, take some solace in Keith’s encouragement,  “Don’t get disheartened – It takes about 40 minutes to master this game.”