A DUMB QUESTION asked too often!

You were born “creative”. Then you were taught not to be. We should be asking “are you still aware of your creativity?”

The number of people who avoid writing, drawing, improvising, and creating because they were told at some point they were not creative is astronomical.  Really.

From an early age, we are taught how to suppress ideas that fall outside of accepted reality. But we are made to hold those creative minds who innovate, create and expand reality in high esteem. There’s something wrong going on with this education.

I don’t know how to respond to people who learn that I improvise on stage and say “I could never do that like you “creative” people”.  As if the “so-called” creative person is another species and the speaker has no access to this mystical VOO-DOO.

Improvisers are simply engaging in human behaviour. Adaptability, risk-taking, the ability to see multiple possibilities, etc etc;  these things are fostered in the best conditions of youth.  They are destroyed under all too typical conditions of our education process.

Those who don’t “survive” childhood unscathed can still be encouraged to remember how to be creative and how to improvise.

”Creative minds have always been known to survive any kind of bad training.”

The creative minds we see in the arts and the world of innovation have survived.  But, bad training has silenced legions of others.

If you are human, you have creative capability. You may, however, need some help regaining what has been taken from you.

In one study  (“Creative Innovation: Possible Brain Mechanisms.” – Kenneth M. Heilman, Stephen E. Nadeau and David O. Beversdorf) The authors write that “creative innovation might require coactivation and communication between regions of the brain that ordinarily are not strongly connected.”  This simply means exercising certain regions of the brain can benefit the creative muscles. It’s like lifting weights to benefit your biceps. Train the brain to make a stronger connection to those beneficial regions. (Some tips to do that later in the article)

The education system teaches you to enhance certain elements of the thought process that it values. Some of those processes get in the way of skills needed to create.

As neuroscience has shown over recent years, WHAT YOU THINK REPETITIVELY ALTERS WHAT YOU WILL THINK IN THE FUTURE.

If you enlist teachers to teach you Chess and your brain will eventually think like a chess master ‘should think’.  Learn improvisation and build behaviour to adapt and create. You can design the brain you want. You don’t have to do it to be a performer. Science also shows us that if we STOP our brain from going down certain avenues, we might inadvertently lead it down more creative routes.

A 2018, experiment showed that when the brain suppresses obvious or ‘known’ solutions, the outcomes are more creative solutions.

Simply put, WHAT YOU KNOW OFTEN GETS IN THE WAY OF CREATIVE THOUGHT.

This state of mind has been called THE EINSTELUNG EFFECT – your brain’s strict, learned answers getting in the way of seeing better ways of doing things.

The study goes on to say

”Taking a less-travelled path” is often considered an effective approach to creativity (i.e., creative thinking calls for a break from habitual thinking and associations)

The answer to the scientist’s question about how to “engage flexibility of thought” is to practice and play with traditional Improvisation skills.

As an improviser, you might initially have a great idea, but conditions change in less than a second or two. That OLD GOOD IDEA might now be damaging. Learning to let go is a great creative skill.  See the world as it is and respond to that. Let go of the world that was.

Improvisers feel this condition as a positive effect from support and through accepting each other’s ideas. Isen points out three impacts this has on thinking:

This is the workout the brain needs to create the mental links for ongoing creative development. Barbara Fredrickson goes further and suggests that “positive emotions such as joy and love broaden a person’s available repertoire of cognitions and actions, thus enhancing creativity.”

This is not just fluffy thoughts to make you feel good about yourself. These studies show us that a creative mind can be constructed as effectively as school creates mathematical processing brains or rule-based grammar minds.

Are you creative?
Yes, you are.

Can you train yourself to get out of the way of things that impede the creativity that exists inside of you?

WITHOUT A DOUBT YOU CAN! 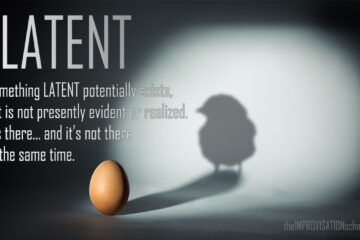