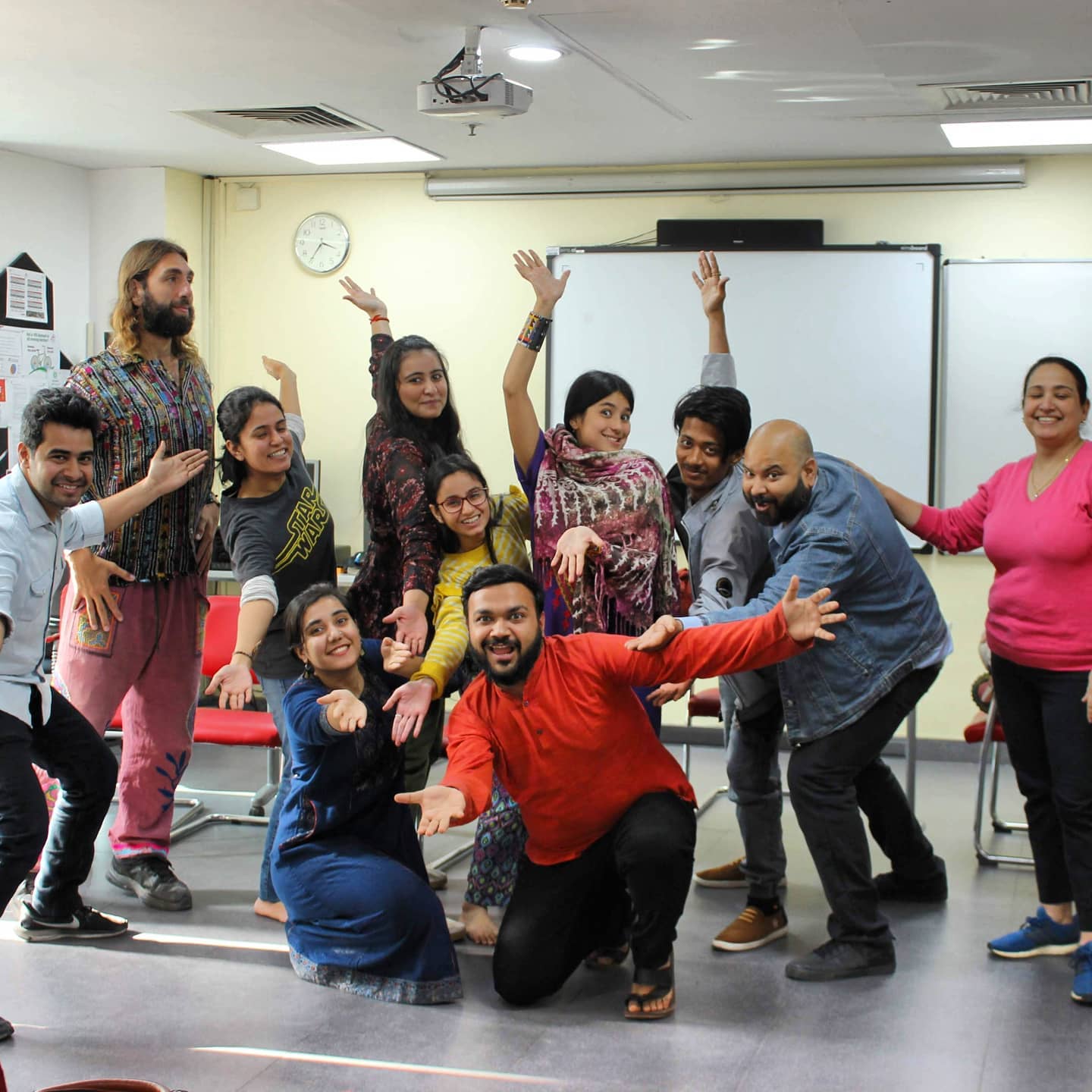 The positive side of the Covid epidemic has been the connections it has made between performers and teachers in the improvisation community.

During an online discussion arranged by the Nursery Theatre in the U.K., I was introduced to an Improviser from India.  For those of you who haven’t had the pleasure, I would like you to meet your brothers and sisters in India from a group called  KAIVALYA PLAYS and their artistic director Varoon P. Anand. Clown work in hospitals and improv for mental health (with Amares )

Shawn:  Hi Varoon!  Thanks for taking a few moments to answer some questions.
Can you tell us a little bit about you and the group?
VAROON: Briefly, I came to Indian in 2009, after living the entirety of my life abroad in several countries.

My parents had retired and I was coming back from Panama, where I had been for several years. I had begun to feel limited in my artistic work in Panama and came to India seeking a larger pond.

Over time, I was also able to connect to my identity as an Indian, something I had struggled with my whole life. I knew no one in India and had no friends. By 2012, I was a working actor and journalist with India’s largest weekly newsmagazine, India Today.

I met like-minded people who wanted to work in a manner different than either the messily organized and unsafe theatre district of Delhi (Mandi House) or the elitist South Delhi crowd.

In 2012, Kaivalya Plays was formed out of a collective of theatre creators who worked backstage at the Short+Sweet Festival (a 10 minute theatre competition). We all believed in opening our doors to anyone (especially the inexperienced), casting gender blind, and creating new innovative work away from the familiar scripts that were being performed ad nauseam.

My improv training from the Theatre Guild of Ancón immediately allowed us to offer tools for absolute beginners. We also emphasized the discipline of working backstage before jumping onstage as actors, to build appreciation for working in the theater.

By 2014, we had founded one of the first improv teams of the capital CueLess Improv which became an important cultural milestone for young actors looking to test and perform their skills.

Over time, we branched out into work in Spanish, teaching cultural management and focusing on technological innovation. Due to the high practical use and applications of improv as a training curriculum and as a form for devising, we are still perceived primarily as an improv company.

Shawn:  How is Improvisation received by the public there?
Since 2019, Improv has now become visible and popular as a performance form for audiences. While the visibility of improv still lags far behind the explosive growth of the stand-up comedy scene in India, it is much more effective than most other forms of theatre in building communities and long-term relationships with performers.

Shawn:  “Kaivalya”?  Why did you choose “Kaivalya Plays” and what does it mean for you?

VAROON: In the past I’ve avoided giving away why I chose the name because it can sound so pretentious, but over time I’ve become more amenable to sharing since people draw their own conclusions.

I was advised to keep an Indian name for my theatre organization, although many in India have English names. I found the name by chance as I was wondering what to name the fledgling organization back in 2012.

At the time, my preoccupation with starting the group was to have a place that would treat artists with dignity, listen to their voices and allow them to bring their ideas to us without us trying to change them. One of the meanings of Kaivalya is “enlightenment through isolation”.

I actively avoid trying to be a guru (the kind of teacher who imparts a philosophy) to my students. I strive to be an acharya (a teacher who gives you a skill). The idea of allowing you a space where you can learn, bring your own ideas and at the same time not lose that which makes you unique or tries to change who you are is why I chose the name Kaivalya for the team.

Surprisingly enough, the second part Plays is meant to be a verb, which focuses on our idea of teaching through games. Improvisation for Mental Health – Oddbird Theatre & Foundation
Shawn:  The Pandemic has affected everyone, but India is now in the unfortunate spotlight of dealing with it’s devastating effects.  How is it where you are?  How has this affected you and Kaivalya Plays? How is the future looking?
VAROON:  There is a generation of young minds living through a time like no other.

India has seen struggle and strife all through the freedom struggle and the genocide perpetrated by Churchill during the Bengal famine. But to live through a period in history where we witnessed our healthcare system collapse due to poor planning, incompetence, and disregard for human life has left sheer disbelief in its wake.

No one is unaffected.

We lost a team member during this wave, another lost his mother and most of us have been chasing hospital beds, oxygen cylinders or medicines for family members.

More than anger, fear or even hopelessness the most commonly reported feeling is numbness. At one point, everything seemed so out of our hands, the barrage of suffering so continuous that most of us no longer knew how to react. Again, the saviour at times like this for many of us has been improv.

Getting into a room full of friends or strangers and getting to play out situations that can inspire laughter is the biggest relief, but also an anchor to sanity.

While the situation has improved, a wariness and distrust remains. Like any other country, India is more divided than ever and we face multiple issues regarding our environment, healthcare, education, energy, infrastructure, unemployment, slowed economic growth, corruption, press freedom, forced migration, religious and caste related violence more than any other time in our history.

And yet, we still hold onto the belief that we can make a difference and can fight through this too.

Shawn:  Looking ahead what do you see for Impro in India and your group?
VAROON: It’s really exciting to be one of less than a handful of groups to bring Impro to India.

For the longest time Kaivalya Plays’ version of Improvisation has kept away from competitive formats. Competitiveness can often lead to a desire to rise by pushing others down, and so we have actively avoided it. But after speaking with Arjun Mehra and attending a class with you, Shawn, we can see that both Impro and the Maestro format still require us to make our partners look good, provide a more fulfilling experience for the audience and yet still bring a playful sense of misbehaviour while competing.

I am also excited by the idea of running drills to train as an improviser rather than only focusing on restrictions in scene work. As an actor I am fascinated by the ability to train the skill sets that Impro looks to build and I am sure audiences will find the formats available through Impro very exciting to watch as performances.

While it is hard to say when Impro shows will be back to in-person venues, Kaivalya Plays started an initiative in April dubbed the India Improv Ensemble, which selected 10 improvisers from around the country to perform a new show every week. The Maestro format will debut as our final performance in July with improvisers competing from Delhi, Hyderabad, Pune, Bangalore, Chennai and Mumbai. From there we hope to find more opportunities to perform with improvisers from other teams as well.

Shawn:  I’m wishing you the best of luck in your brave new explorations.
VAROON: I would just like to reiterate my excitement at entering a world of impro I had been afraid to for quite some time. As newly minted associated members of the ITI, (INTERNATIONAL THEATRESPORTS INSTITUTE), we have felt very welcome and privileged to have access to so much material and experts like yourself, Shawn.

We look forward to training in the Maestro from a Master such as yourself, and we also ask anyone who wants to collaborate or work with us to contact us at contact@kaivalyaplays.org
Thank you for the opportunity to share our thoughts, Shawn! And thank you for what you do!
Shawn:  Thank you. Looking forward to visiting India when the world allows it. 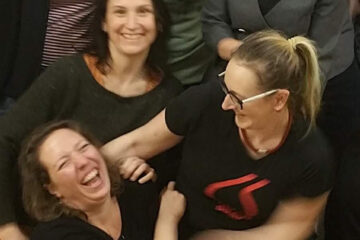 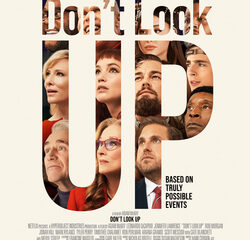