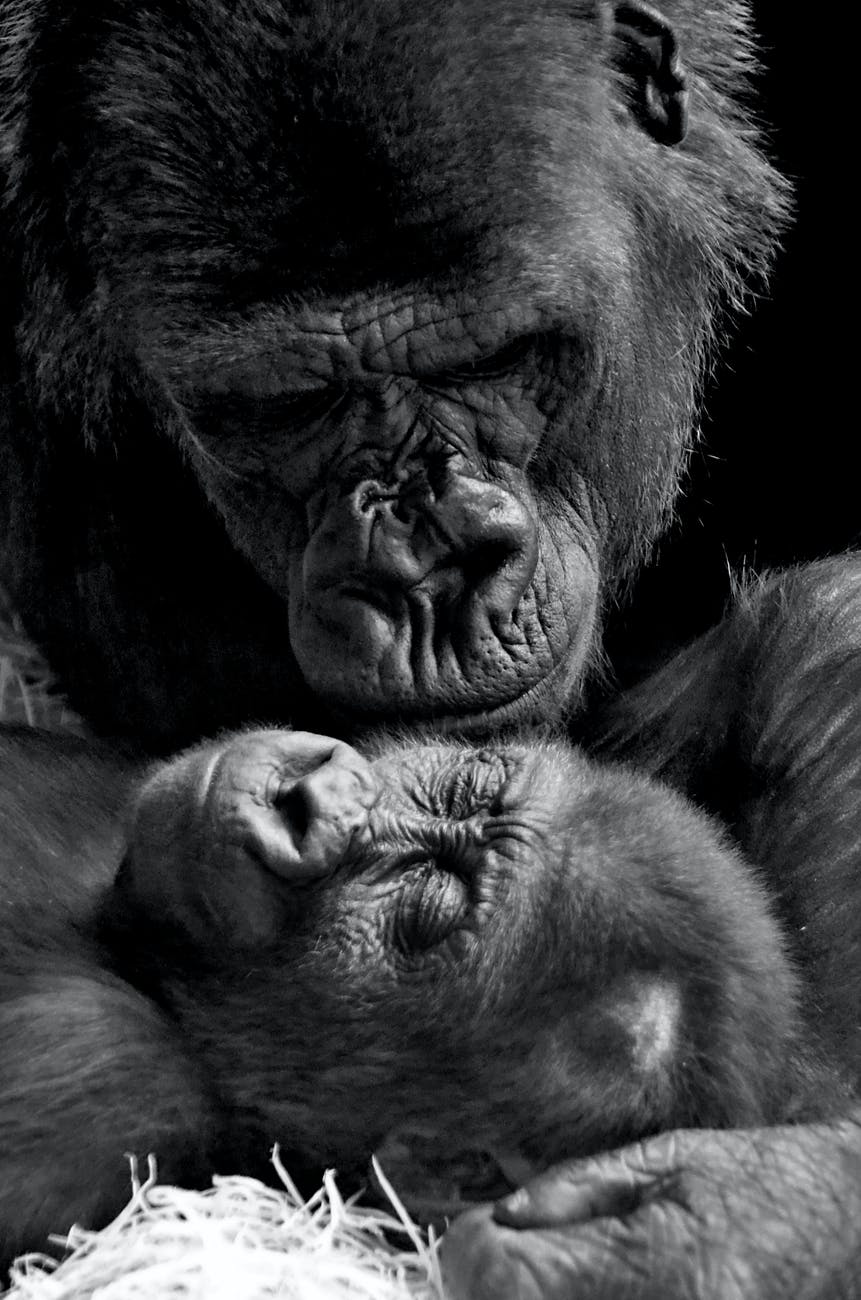 One exceptional difference between humans and the rest of the animal kingdom is how much we hide and mask of ourselves compared to these other earthlings.

By 9 months, we have already learned to ‘present’ our emotions in a way to manipulate others. By Adulthood, we’ve become experts at hiding and altering feelings, reactions and intentions, often without realizing that’s what we’re doing.

Animals are less likely to hide their inner experiences from those around them. (It does happen occasionally, but that’s not the point here. Stop distracting me.).

Where humans attempt to hide their stress or fear, most animals express themselves with a bark, bite, run or cry. We see the truth immediately when a cat’s pupils dilate before the attack or when a horse drops its ears in the face of uncertainty.

This animal vulnerability gives us some insight into our own true nature. If we look closely at a stressed human we see similar signs as the ones shown by the stressed Gorilla, Cat or Crow. When we are stressed we might say, “It’s all cool,” but we signal something different. The body doesn’t lie. And those around can see that something is up.

At the beginning of many workshops, I chat with students as we all face each other, sitting in a circle. Usually, I write notes on what they are saying but the students often show more about themselves when I look down to write or when I hold eye contact.

Some students shy away from sustained eye contact. They fidget and shift and their eyes glance down and away. Some students get nervous if you break eye contact even briefly. They hesitate or look to where I’m looking with the assumption that whatever I am looking at is more important than what they’re saying.  And of course, there are those few who effortlessly share connections with everyone in the room regardless of where I’m looking.

There is no singular answer with how long to maintain eye contact but there are consequences if we make the mistake of holding eye contact too long or too briefly with some people. When we do it right we foster comfort. Do it poorly and communication becomes more difficult.

Think about your own reaction when someone is staring at you longer than you feel comfortable.  There’s pressure to respond quickly. You might feel uncertain or threatened about the teacher’s intention.  Your mind and body go into defence mode as the fight/flight reaction builds.  At this point, your ideas become less cohesive. You’ll change subjects, give up control or ramble on incoherently, trying to get control back.

Conversely, when your partner fails to make eye contact, it’s easy to feel disconnected. Some people fight to gain their partner’s attention. Some give up trying to express themselves all together. On the positive side some people feel a sense of ease when the teacher looks away as if expectations have dropped.

Generally, I’m not a fan of most Zoos but I was invited to perform at a fundraiser for the Calgary Zoo aimed at supporting their endangered animal breeding programs and conservation projects, which seemed like a worthy project.

To learn about the Zoo I was given a tour by the keepers in various areas.

It was a fascinating tour behind the scenes of the Elephants, Great Apes and others. I was impressed by the heartfelt connection the keepers had with the animals.

As we approached the Gorillas I was told to avoid direct eye contact with them because locking eyes would be seen as a challenge that the dominant Gorillas would act upon. The information was reinforced when I was shown a massive metal door that had been knocked off of its hinges by a Silverback Gorilla who had his status challenged by the eye contact from a previous visitor. (these weren’t your average door hinges. The bolts that held them on were almost as wide as my thumb.)

Think about the intensity that your cat has when its eyes lock onto its target. Whether it’s a mouse, a bird or your leg, this direct focus announces intention to attack.

Wolves, Eagles, Owls. The eyes tell you who’s in charge. No words are necessary. Lower status creatures drop their eyes and look away. Avoiding the interaction with a 400 pound Silverback is safer than playing a status game that might end poorly. When a Gorilla looks at you. Drop your eyes.

One of the first lessons Keith Johnstone offers with status interaction is to use eye contact to assert dominance. High-status people tend to hold eye contact longer than those with low status. This behaviour is not always a show of aggression. Sometimes it is simply a sign of calm confidence.

A nervous student in the classroom feels the pressure of expectant eyes and instinctively feels uncomfortable from the threat. The Gorilla Paul Donn offers a benevolent way forward in creating a safe space.

Azizi and Paul Donn are two Gorillas at the San Diego zoo. Dutch primatologist Frans De Waal recounts the introduction of the small female Azizi to the massive mountain of a Gorilla, Paul Donn who weighed 5 times that of the little female. “Paul Donn is calm, and we see Azizi shuffle closer and closer toward him. The male acts as if he fails to notice, tactfully inspecting his toes and never looking straight at the nervous Gorilla girl. “

Paul Donn’s tactic disarms Azizi’s fear. He remains present but removes eye contact which can be seen as a threat.

Keith Johnstone would consistently drop his status at the beginning of workshops to disarm the nerves of students who clutched their notebooks insecurely ready to write down every ‘um’ and ‘err’ he uttered. Keith knew that students in this state were not in a particularly healthy reality to learn anything.

Then there are those who need your eyes.

Most of us need a good amount of eye contact to feel that we are being heard. If the eyes aren’t attentive then the person is not with us.

From the American Psychological Association,

“Social psychological studies of eye contact generally find that people look more at the other person when listening to that person than when they themselves are talking;

If you write notes when people speak, learn to write without looking down at the paper.  Learn to predict when your partner will look away and how long they will break eye contact.  Use that moment to glance away if you have to.

If the opposite is true and the student is nervous when you look at them, glance down or at other students a little more often. I’ve never inspected my toes like Paul Donn but I have scratched at imaginary stains on my clothes to set students at ease.

As with Gorillas, a teacher needs to assess what their eyes are doing with each student specifically. Are we a threat to them? Are we calming them? Do our eyes work as a tool or a weapon? When you first meet students, your intentions are less important than the student’s perception. What you think is “respectful attention” might be felt as invasive pressure.

Read the body language and know what you are doing to them with those eyes of yours and help them see the world a little more calmly.

Practice quick adaptation.  When meeting someone new you never know what kind of eye contact will be best.  The best thing to do is recognize when the person you talk to is uncomfortable or not.  Fine tune the comfort level by adapting your eye contact..

AND – know that there are times when healthy discomfort is useful.  When control in the class is lost and you need to pull people’s attention back, more sustained focus can set the warning signals off in the students, warning them that they need to pay attention.

This dominant visual status tool is even more important with an unruly class of teenagers or business executives who have decided to take over the classroom.  The 6-year-olds who are nervous for no other reason than you are an adult benefit from shorter distracted eye contact at first to bring them out of their shells.

As I said earlier, some people have a natural sense of when to hold and when to break eye contact.  The best way of improving is practice.

Here is an exercise to help improve your connection and contact.  It’s a Keith Johnstone exercise called BEEP BEEP BEEP!